One of the things which really attracted me to the Texecom panels was the ability to interface them directly with the computer – and other things (to be described in a future post). However, in order to do this you need to buy a fairly expensive cable from Texecom – the COM-USB:

These seem to retail for about £40, although there are some cheaper 3rd party versions on ebay for rather less, which seem to do exactly the same job: 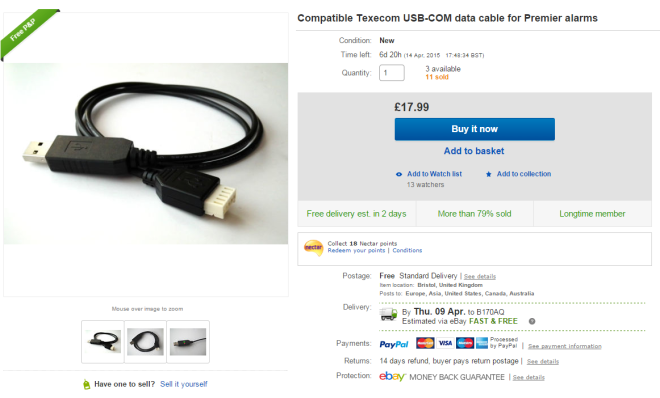 However even this seems a bit steep for what looks a fairly simply USB cable, and the pins on the Premier Elite main board also appear fairly standard.

In which the author has discovered that the connector on the board is no more than a straightforward serial connection, with three pins – TXD, RXD and GND – connected. Using a USB-serial converter he was able to get everything working with the official ‘Wintex’ software which is a free download from Texecom.

I took a slightly different approach and bought from ebay a very small board which converts a mini-USB plug into serial with pins and solder points as outputs. It was about £4 delivered.

I then used an old motherboard header cable directly soldered to the TXD, RXD and GND points on the board above, and connected the other end to pins 3 (GND), 4 (TXD) and 5 (RXD) at the Texecom end. So in other words the data is received by the Texecom on pin 4, and transmitted from pin 5. Once this was all wired up I secured the board inside the casing with a cable tie and ran a USB lead outside the box.

So a very cheap solution which is just as good as the £40 official alternative.